Subspecies and range of Delias kuehni : 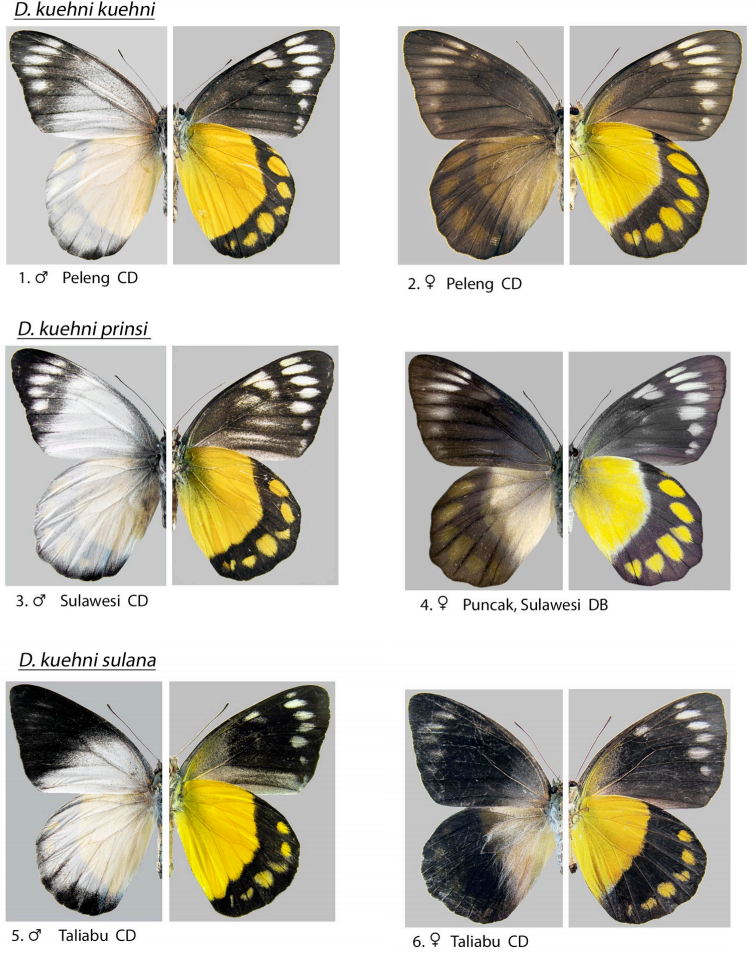 Resembles D.singhapura on the upperside. Underside resembles D. themis, but the underside hind wing submarginal spots are yellow instead of white, with the underside forewing predominantly black.

We have not been able to see the description of the ssp. yoshimiae, as it has only been given this status recently, having previously been thought to be a female form of D. k. sulana.

Male: Upperside white. Fore wing with greyish-black distal area, the edge of which is ill-defined. this area does not enter the cell and narrows posteriorly. Subapical white spots five, the ones in 5 and 6 longer than the others. costa and basal area greyish-black. Hind wing with some black marginal spots, the posterior ones usually oblong and much larger than the others on veins 2-4. Some greyish-black dusting at the base.
Underside of fore wing fuscous-black with white spots. Subapical spots as above but much larger and better defined, the one in 3 more rounded than the others. A small submarginal spot in 2 and a smaller double spot on the submedian fold. A subcostal patch formed of an oblong spot in 8, a small spot in the base of 6, and a somewhat ovate and larger spot in 5. Hind wing chrome-yellow and with a fuscous-black marginal border about 9mm broad on vein 3, its edge almost evenly curved and well-defined. Five yellow submarginal spots, the one in 6 larger than the others, and the ones in 3 and 5 larger than those in 2 and 4. Some slight black dusting at the base.