Subspecies and range of Delias felis : 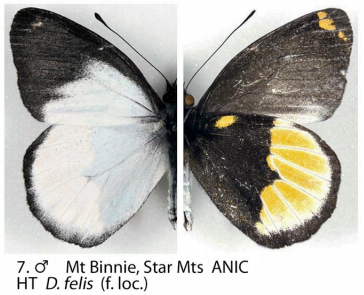 A very recently described species. Very similar to D. hemianops, but recognisable by the yellow sub basal spots on the underside hind wing, absent in D. hemianops. Could well be a subspecies of Delias hemianops.

Female. Fore wing upperside as in male but with reduced white area; between one third and two thirds of anterior portion of discal cell black; one or two pale yellow subapical spots much less distinct than those on the underside. Hind wing upperside as in male with slightly broader black terminal border. Underside of both wings as in male; subbasal yellow-orange spot near costa reduced and faint. Length of fore wing: 27mm."